Phil Campbell, Red Bay get wins prior to season openers 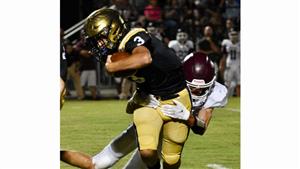 Phil Campbell beat Hamilton 18-0 in a game delayed by lightning for almost an hour.

The Bobcats took the opening drive and stuffed the Aggies to take a 6-0 lead on a four-yard run by Bryant Hyde. The Bobcats added scores in the second quarter on a two-yard run by Boone Swinney and a 22-yard run by Hyde.

“I was pleased with our guys’ effort tonight,” said Phil Campbell Coach Kevin Barnwell. “We saw some things we liked and some things we need to work on before we open up next week.”

It was a pleasing debut for new head coach Heath Childers. “I was proud of the way our guys fought tonight,” he said.

Nevertheless, there were clear areas for growth, Childers added. “Obviously, we have a long way to go to get to where we need to be. I have stressed improvement on a daily basis with our guys. Now, we just need to go out and get better.”